From the Deep Dark Sea To shore up South Florida’s quickly eroding beaches the owner of a dredging company decides to dig sand from a restricted area in the deep ocean. He dumps tons of the pristine white sand and families flock to the shore to enjoy the summer. But something else came with the sand. Something ancient. Something hungry.

There’s a huge problem in South Florida with beach erosion due to storms and rising seas levels. For decades Miami-Dade, Broward and Palm Beach Counties have been pumping sand in to shore up eroding beaches. Most of this sand can be found offshore. But recently they’ve begun running out of sand and are having to look for it from other sources, including using recycled glass.

Desperate county governments are willing to do anything to save one of their main sources of revenue, tourists who come to the beaches. This leaves opportunities for corruption and cutting corners. It also leaves an opportunity for a creative writer to look at just how screwed up things can get when you “f” with Mother Nature.

And that’s where I come in.

“But sir, you know this area is restricted.”

Captain Johanson was a good man but he knew nothing about business. Avery Pittman did. He’d spent his whole life building up his father’s dredging business from one rusty little boat into a fleet of over dozen sturdy vessels. The company was making money now, lots of it. And Avery sure as hell wasn’t scared to cut a few corners to make a profit.

“Listen Captain. No one will know. It’s not like they can just look at the sand and tell where it came from. Sand is sand right. Let’s just keep this between you, me and the boat’s navigator.”

“Look, you can take the ship out another few miles into rough seas and try to scrounge up a tiny bit of sand from the designated area, over the next several days, or you can get all of the fresh sand you need right here, in just a few hours. You’ll be home by dinner. We’ll save a ton on gas and equipment and crew time. And everyone will be happy because we’ll be coming home with a boatload of fresh sand. Whadda ya say?”

Avery patted Johanson on the back. He knew the old timer would come around.

“Well, okay. But we need to make sure that this sand gets tested when we get back.”

That was a lie. Baker, the environmental scientist they used to test all of the dredged sand for contaminates had called in sick the last few days.

Miami-Dade County needed this sand yesterday, and they were paying well. He wasn’t about to hold up the works to wait for Baker to get back. No this sand was going out as soon as they got back to port.

Avery walked to the back of the boat and looked over the side at the pump sucking up the sand from the deep dark ocean. Some spray hit his face as the wind and the sun blew over his thinning hair.

What a good day to be out on the ocean.

What a great way to make a buck.

Haley had been working diligently on her sandcastle for the last hour while Brenda sat under her umbrella reading the latest thriller by her favorite author, William Turnage.

They’d had a wonderful vacation so far. The ocean and the beaches of south Florida were a wonderful break from the cornfields of Kansas where they lived.

She glanced over at her husband, Jason, who was boogie boarding with their son, smiles on both their faces as they caught a wave together.

Haley was standing beside her holding something in her hand.

“Are you sure Mommy? It looks like a little egg to me.”

She was right. It did look like an egg. It was about the size of her finger nail and sand colored with streaks of dark green gliding over its surface.

“In the hole I dug over there. There’s a lot more too. Wanna see?”

Brenda got up and walked over to her daughter’s sand castle. Sure enough, down in the bottom of the hole was a cluster of the tiny eggs, all bunched together.

“Why don’t you put this one back, baby. And cover that hole up. I think these could be turtle eggs and we want to make sure that the babies don’t get hurt.”

Brenda had watched enough of the Discovery Channel to know that endangered turtles would lay their eggs on the beach and bury them. The sun would warm and incubate them, then one night the babies would hatch and head out to sea.

She watched as Haley gently covered the eggs back up.

Then she smiled, knowing that she’d done her good dead for the day. She’d help save an endangered species.

Carter was so excited holding Misty’s hand as they walked along the beach. He carried a warm blanket over his shoulder, looking for just the right spot to toss it, and her, onto the sand.

Misty giggled as she pointed to a nice flat spot back from the waves, right under the moon.

Carter gently spread the blanket out and sat down with Misty beside him.

She was so hot.

He’d just met her a few hours earlier at one of the bars in South Beach. They both had sneaked out from their parents hotel rooms and both carried fake ID’s to get into the clubs. He was nineteen and Misty said she was the same age, although he suspected she may be just a little bit younger.

It didn’t matter though. She was smoking hot, with long blond, sun kissed hair and a tight ass.

And she was ready to go.

He put his arm around her as they lay down. Then they started kissing. She smelled so good.

He moved his other hand along the side of her body, gently caressing her curves. Slowly he made his way up to her small but perky breasts.

She didn’t stop him.

She sighed and leaned in closer.

Carter jerked the hand he had wrapped around Misty’s back.

“Something just bit me! It felt like a crab or something.”

They both jumped up and Misty started screaming.

She jumped up and wrapped her legs around his waist. Normally he would love her in this position, but not with his hand stinging and probably bleeding.

Something slide over his foot.

He jumped and fell backwards, Misty still wrapped around him.

“There! There! I see something. Oh God there are a bunch of them!”

It was hard to make out in the dark, but scurrying across the sand were dozens of tiny lizard-like things. Some were digging out from the sand and others were moving as fast as they could to the ocean.

Carter felt something shimmy up his leg, sharp claws digging into his skin. Then another prick on his inner thigh. He threw Misty off and then flicked away whatever it was that was tasting him.

He grabbed Misty by the hand.

They both ran as fast as they could away from the beach, leaving the shrill calls chirping away in the distance.

Captain Shontaug of the cargo vessel Medea strode across the bow of his ship, steely eyes inspecting the ocean for pirates.

They were out there.

This area off the coast of Africa was dangerous water, filled with Somali pirates looking for any ship to hijack and ransack. Just last year, another ship captained by a good friend of his had been caught and all the crew captured and held for ransom. Of course the company paid it, but not until after the crew was beaten and nearly starved for weeks.

No, that was not going to happen to him and his men.

As he continued his inspection, OS Charbinneau ran up to him.

“Captain! We have something on sonar!”

They were here sooner than he thought. And none had ventured out this far before. He hoped those private soldiers the company hired were ready. He saw one of the men just behind Charbinneau loading his weapon and getting into position on the side of the deck.

“About a half mile, sir, off the port bow. It looks like maybe six too.”

They weren’t prepared to handle that many. Damn it! The company was paying too large of ransoms. It made these desperate pirates more and more daring.

He could see something floating in the distance, but they didn’t look like boats.

What the hell were they?

“I don’t think those are pirates.”

He pulled out his walkie-talkie and called the bridge.

“Chief Duval, take us closer, I want to get better look.”

Thirty minutes later the cargo vessel pulled up beside the huge rotting corpses of some sea creatures he’d only read about. In over thirty years at sea he’d never before seen a giant squid, much less six of them. They were massive, over fifty feet long.

Also floating in the middle of the giant squids were several dead blue whales. These once majestic beasts were over one hundred feet long, the largest creatures on the face of the Earth.

“What do you think got these things, Captain?” Charbinneau asked.

“I don’t know… but look, look at those marks on their sides. Are those bite marks?”

Each of the giant creatures was riddled with what looked like giant teeth marks. Huge chunks of their flesh were just missing.

“No. If those were bite marks then whatever attacked these squids would have a mouth twenty feet wide. Nothing is that big. At least nothing that’s swam in these waters for millions of years.”

“Yeah, you’re right Captain. They’re probably just decaying and some other sharks and stuff have taken little pieces of them.”

“Let’s clear out of here. We need to get back on schedule.”

Captain Shontaug turned away from the creatures as other crew members were snapping photos on their phones. But just as he went to take a step, the boat shuddered.

There it was again. Was it something hitting the bottom of the boat?

This time it was harder and shook the entire ship. Shipping containers creaked against their restraints as the boat rolled back and forth.

Then suddenly the front of the ship began rising into the air and fell back down.

The crew began yelling in panic and several fell overboard as the ship came crashing back down into the ocean.

“Bridge get us out of here, full speed ahead!”

Then he saw something out of the corner of his eye, a churning in the ocean.

Something was coming for them.

Captain Shontaug opened his voice to scream as the creature jumped out of the ocean. But before he could even utter a sound flesh fell on him.

The last thing he saw before he was crushed to death were giant razor sharp teeth and a reptile-like creature big enough to destroy Tokyo.

And it was hungry. 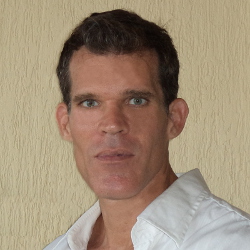 Hey! I’m William and I hope you enjoy these short stories. Be sure to check out my longer work, Extermination Day, Nanoswarm, and Rise of the Jinn.